The symbols in the PEPPER fonts were first described in a phonetics text for students in communicative disorders and were subsequently incorporated in a speech analysis package titled PEPPER. To distinguish this font from other fonts containing IPA symbols, it was titled the PEPPER font. The first published version of the PEPPER font was a monospaced font created for WordPerfect 5.1 and WordPerfect 6.0 for DOS and is no longer available. The PEPPER program now uses the PEPPER Proportional font. 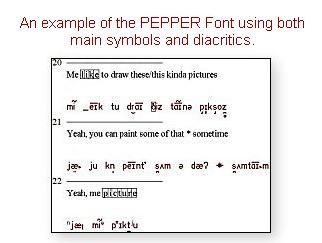 The PEPPER fonts are available as freeware to colleagues who frequently use phonetic symbols in documents. To download the fonts, see the Installation Instructions link on the next section. These are TrueType proportionally spaced fonts designed for Macintosh and Microsoft Windows applications. For detailed instructions for using the PEPPER fonts in Microsoft Word, see the Complete Manuals. General instructions are provided for other applications.

We are pleased to announce that, as of August 30, 2018, the companion PEPPER font, called CP5e, is available to freely download. The PEPPER CP5e font is for use with Clinical Phonetics-5th Edition (Shriberg, Kent, McAllister, & Preston, 2019). This font includes the addition of a symbol for the alveolar flap as well as changes to the diacritic symbols for fronted/advanced and backed/retracted. The PEPPER Proportional and PEPPER sans Diacritics fonts, which include symbols consistent with the first 4 editions of Clinical Phonetics, can also be downloaded with the CP5e font.